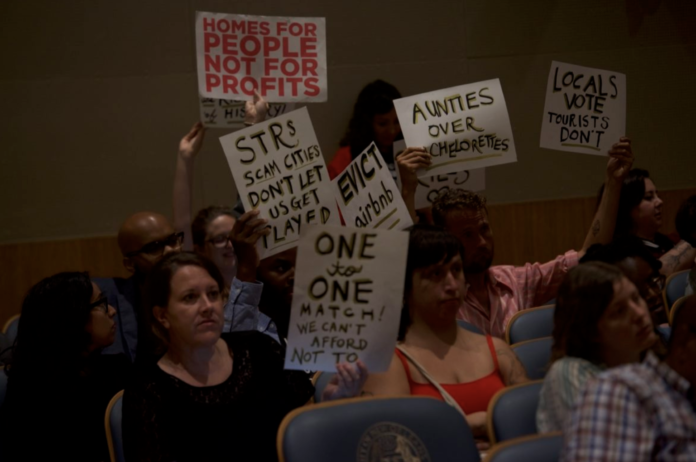 The votes were the culmination of 15 months of work by the council, which has been trying to rewrite the laws since May 2018, when many of the current council members were first sworn in.

“We’ve been having a conversation about how to regulate short-term rentals for over two years,” said Councilwoman Kristin Palmer, who has led the charge for reform. “It would be impossible to list out all of the CPC public hearings, community meetings, and thousands of individual conversations my colleagues, our staffs, and I have been a part of.”

The new rules will go into effect Dec. 1. They create new baseline rules for short-term rentals that are much more restrictive than those put in place when short-term rentals were first legalized in New Orleans in 2017 under former Mayor Mitch Landrieu.

“I firmly believe that what is before us today has been carefully researched and crafted, and it is the best possible policy for the City,” Palmer said.

One of the ordinances amends the city’s zoning law on where short-term rentals are allowed to operate. Some of the biggest changes there will be for residential short-term rentals. Residential rentals with absentee owners, or that were controlled by companies with dozens of properties in their portfolios, were widely seen as one of the most significant problems with the industry.

After Dec. 1, residential permits will only be granted to owners with a homestead exemption, meaning they use the property as their primary residence. The ordinances also uphold a full ban in most of the French Quarter and create a new ban in the Garden District.

In statements after the votes, representatives of HomeAway and Airbnb, the two most popular short-term rental platforms operating in New Orleans, immediately criticized the ordinances.

“The policies passed today take New Orleans in the wrong direction, harming local homeowners who’ve played by the rules and placing the remaining few under some of the highest tax burdens in the nation,” said an email from Philip Minardi of the Expedia Group, which owns short-term rental platform HomeAway.

The second ordinance sets up new enforcement measures to ensure that these new rules are actually followed. A lack of stringent enforcement was one of the other major flaws that critics identified in the old laws. In June, The Lens reported on Ada Phleger, a resident who worked for months to get the city to revoke an apparently illegal short-term rental on her block. She eventually got so fed up with the system that she rented the Airbnb herself to prove it was improperly permitted. The city ultimately revoked the permit.

One of the most important measures in the enforcement ordinance is the creation of a new platform permit for short-term rental platforms like Airbnb or HomeAway. There are conditions for maintaining the permit, such as refusing to list properties that don’t have permission from the city. If the platforms violate the rules, they could have their permits pulled.

The City Council also passed a resolution to add a ballot measure to the statewide election in November that, if approved by voters, would allow the City Council to levy a tax up to 6.75 percent for short term rentals. That revenue would be split — 75 percent would go to the city for infrastructure improvements and 25 percent would go to New Orleans and Co., formerly called the New Orleans Convention & Visitors Bureau.

The tax was brokered during this year’s legislative session by Mayor LaToya Cantrell, Gov. John Bel Edwards and the tourism industry as part of Cantrell’s so-called “fair share” infrastructure deal.

The Cantrell administration initially predicted that the tax would generate $10.5 million for the city, which would require the size of the short-term rental market to remain about the same. Cantrell has not taken a position on the council actions to place more restrictions on short-term rental rules and tightening enforcement, which could shrink the market and, as a result, the tax collections.

Some housing advocates have been critical of the tax for two reasons. First, they were hoping that new taxes and fees for short-term rentals would go towards affordable housing, not infrastructure improvements. The other complaint is that part of the revenue would go back to the tourism industry, which many believe get too much public funding as it is.

“We have a problem with devoting any short-term rental revenue to the tourism industry,” said Andreanicia Morris, the Executive Director of HousingNOLA, which publicly opposes the tax.

Read more about these restrictions here.

New Orleans may tighten rules on short-term rentals like Airbnb