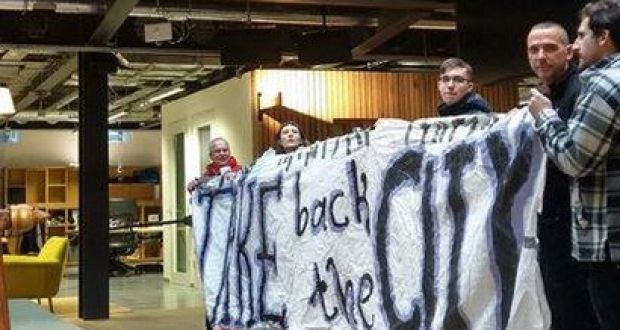 Housing activists occupied Airbnb’s Dublin offices on Saturday, in protest over the short-term letting platform’s “impact on the housing crisis”.

The Airbnb head office was open on Saturday as part of Open House Dublin architecture event that allows public access to buildings. As a result of the protest, access to the Airbnb offices as part of the event had to be cancelled.

Shortly after 11am on Saturday a group of activists from Take Back the City entered the Grand Canal Dock offices with a large banner. The group ended the “flash occupation” of the building roughly two hours later.

The activist group has called for “a total ban” on Airbnb and similar short-term letting platforms in Ireland. The campaigners claim the platforms are keeping properties that could be used for long-term rental accommodation off the market.

The group, Take Back the City, is currently occupying 41 Belvedere Place in Dublin 1 in defiance of a High Court order to vacate the property.

The building is the third vacant property the activists have occupied since early August as part of a protest over the amount of vacant housing in Dublin.

The Government has been considering introducing legislation to regulate short-term letting platforms.

Speaking to The Irish Times, one activist involved in the protest, Conor Reddy, said short-term letting platforms were “compounding” the housing shortage in the capital.

The flash occupation was part of a new stage for the campaign, which would target other symbolic buildings, he said. “There are the offices of vulture funds around that area of the city, so they are potential targets,” he said.

The group is looking to take the campaign to a “larger scale, branch out of the city centre into the suburbs,” and grow into a national protest movement, he said.

In a statement, Take Back the City said Airbnb had “exacerbated the housing crisis in Dublin and Ireland as a whole”.

“Our tenant support groups frequently hear from people who have been evicted on grounds of ‘significant renovations’, only to find their old homes subsequently rented out on Airbnb and other short-term letting platforms.”

The statement said there were three times more properties available on Airbnb in Dublin than were being advertised for long-term rent.

It added that in 2017, there was a 63 per cent increase in Airbnb usage across Ireland and over the same period the number of people declaring themselves homelessness rose by 2,000. 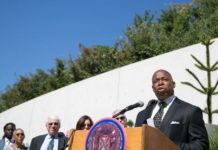