It has revolutionised the way we travel, with more than 2m people bedding down in an Airbnb on any given night. Yet it’s my new year’s resolution never to use the homesharing platform again. Here’s why.

I spent New Year’s Eve trapped in an Airbnb apartment in Oslo with my family. The lock on the front door had broken, you see. We discovered this as we were heading out to enjoy the festivities, the focus of our trip to the (eye-wateringly expensive) Norwegian capital.

It was comical at first: “Come on, let me have a go at it.” Then, increasingly, less so. We quickly got on the phone to the owner, but there was no answer. Ninety minutes later, she responded.

There followed a further hour and a half in which she tried, in vain, to tell us how to open the faulty door. Then we had to wait another 90 minutes (a pattern was developing here) for her father-in-law to come to the two-bedroom flat and try to unlock the door from the outside.

No joy. Of course not: we’d explained from the beginning that the lock was broken (I’d texted her photos) and said she needed to pay a locksmith to release us. In desperation, at one point I even called the fire brigade. They couldn’t help.

It was only after we’d been stuck inside for almost 24 hours, and I had completely lost my cool, that the owner finally did as advised. We then had to wait for the locksmith to arrive. When he did, he released us within minutes. “It is an old 1980s lock,” he shrugged. “They break.”

The property hadn’t been a resounding success up to this point. On arrival, there was only one clean towel, which meant I had to rummage through the owners’ dirty laundry basket to find others to wash. Only the living room had heating. And only one of the four rings on the electric hob worked.

At least it was cheap: for a week over the festive period, in the middle of Oslo, £600 for the four of us was a steal. And having a kitchen, albeit a one-ring kitchen, saved us loads on eating out. But my experience has made me completely re-evaluate the benefits of homesharing platforms such as Airbnb. When it works, it can be great. When it goes wrong? Suddenly you start to miss all the things you take for granted in a hotel.

It can be the idiosyncrasies of a property as much as anything. Chris Haslam, this section’s chief travel writer, once got trapped outside an Airbnb apartment in Cordoba, Spain, in just his underwear when the wind blew the door shut. With his phone and wallet inside, he was forced to go door to door, begging and borrowing clothes, until the owner could be tracked down the following day.

Spare a thought, too, for the owners. Patrick Holt let out the flat above his motorbike-repair shop in London for three years. “Everyone was lovely bar one,” he says. “But that one guy was spectacular. It’s a small flat, but it has an enormous roof terrace, which can host 100 people. And he did.

Tony Sophoclides, strategic affairs director of the hotel association UKHospitality, says: “Like much of the digital economy, homesharing has boomed from nothing. Regulation and legislation are at best playing catch-up and at worst non-existent. There are a lot of grey areas.”

Responding to my complaint, Airbnb said: “There have been over 400m guest arrivals on Airbnb, and incidents like this are incredibly rare. When issues do happen, we work to make things right.”

Granted, Giuseppe, in the Airbnb support team, was helpful and tried to put pressure on the owner to pay for a locksmith, stating that a lockable front door was in the rental agreement. To which my husband quipped: “But does it have to be unlockable?” 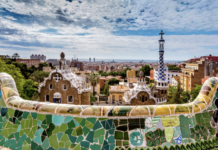